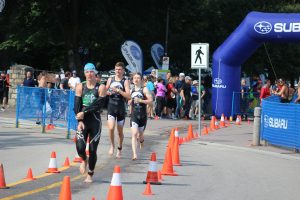 This year will be the 23rd year for the Kelowna Apple Triathlon, just about 45 minutes from Big White. Every year Kelowna welcomes some of the most elite athletes from all over the world to the sunny Okanagan to compete in this rigorous event. Held over a weekend in August, this year it is August 20-21, this event draws crowds all over the city. Come down and cheer on the athletes as they compete for the crown. Also this year, the International Triathlon Union has awarded Kelowna a Continental cup Race. This will attract a larger field of Elite Athletes competing for points for their world ranking as well as a $10,000 USD prize purse, as well as the Kelowna race being the Canadian National Championships, with its $25,000 CAD prize purse.